Another long day in store for us, but again we are on the bus! Our first stop is St Isac’s Cathedral that we saw from the outside yesterday. Today we actually went inside which was great. It was beautiful inside and quite large compared to the other cathedral’s we’d seen in Russia so far. We heard a bit about it’s construction, but mostly we just gazed up at the amazing dome and inside art. 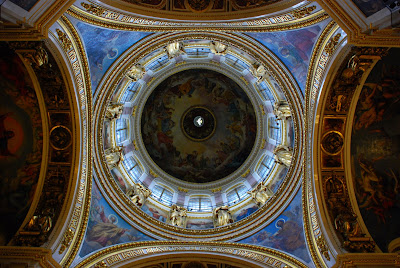 After a while here, we then headed to Peter & Paul’s Fortress. I wasn’t sure how much I would like this, but I found this to be one of the most enjoyable things we’d done so far. The fortress is actually on it’s own little island in STP and houses the Russian Mint, a church and some other stuff that I am sure I was told but don’t remember! We all did our group photo – it’s pretty funny because we are all super bundled up! It was absolutely freezing outside and we were warned in the morning that it would be a cold day, so we bundled up as much as we could. 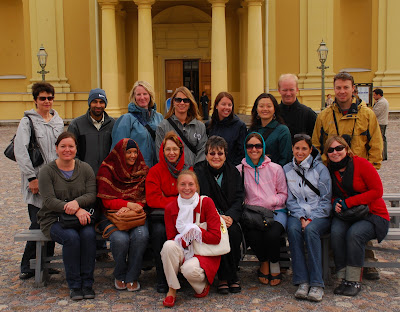 Inside the church are tons of graves/coffins. The one that was the most interesting to me was the area at the back that housed the grave of the last Tsar of russia. Apparently his family was scattered all over Russia and it’s only been in the last few years that they have managed to find most of his families’s remains and bring them here. It was strange again in that there seemed to be no security and not a lot of grandeur which you might expect for the last Tsar of Russia!!

Enjoying our time here, but needing to move on, we headed over to our traditional Russian lunch that was waiting for us. It was actually pretty good. I even managed to eat some vegetarian Borsch soup (beet root soup). It was good too.. My main course was a bit of a let down though – it was just a few tossed vegetables! haha. apparently they don’t quite know what to do with vegetarians!
Our last stop on our day long tour was the Peterhof Gardens. Too bad it wasn’t a sunny warm day! But Granny, Dasha and I enjoyed exploring it anyhow. It is full of gold plated fountains, tons of trees, greenery, etc. This is something I really miss while living in India. we just don’t get outdoor beauty like this and it’s really unfortunate. We were lucky too that Dasha came along with us since she was able to tell us about the different trick fountains where if you sit on a bench you will get sprayed with water or if you walk over certain rocks you get sprayed. 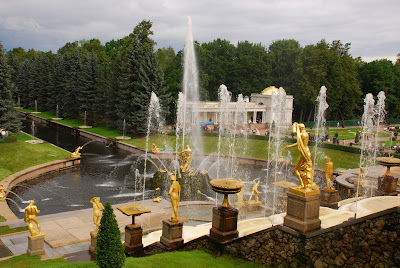 We also had a nice view over the Gulf of Finland. Granny got so excited thinking she could see Finland across the water.. but it was just STP 🙁

Since we were quite a bit out of the city it took a while for us to get back to town. As soon as we got back, it was time to head out to our final event of the day – the Cussak performance of traditional/folk Russian dance and music. I thought this would be cheesy, but since the whole gang was going, I figured I better participate as well since it is the last night! 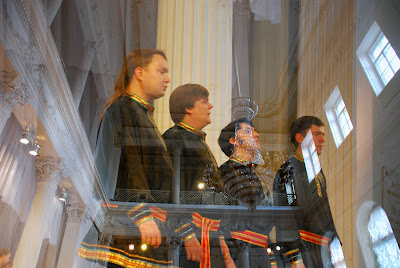 At first it was a bit dumb, but it ended up being super cool and I think I prefered this over the ballet. Those dancers are amazing. You know the ones that get super low to the ground and kick their legs up? So amazing. They even pulled one of our own up there, Amit! He was mortified.. and i was scared to death for the rest of the show thinking they would then pull a girl up – thank goodness they didn’t!
It was already getting a bit late by the time we got back from the Cussack show, so we had to have our final night’s dinner there at the hotel restaurant. Again a combo mix of Sushi and Italian (seems they like to combine those two restaurants in STP!). I again went for Italian, but it was a mistake!! Should have done the sushi.
It was a great last night though and it was already getting sad to think that we’d all be going our seperate ways the following day. Granny got up and gave a little speech which was excellent. made me all teary again (i had bumped my bruise earlier in the day and seriously broke down in tears it hurt so bad!!).
Most of us ‘youngins’ decided to go across the road to the supermarket where there was also a bar for a final farewell. It was a funny place. We think they were having a talent show type thing when we got there. But we can’t be certain.. But by the end of the night, just random people were going up on stage to showcase their dance skills. It was hilarious.
And sadly our night had to end. I knew I’d see most people on Sunday since we didn’t leave til the night, so I saved my farewells for then.
This entry was posted in Russia; st petersburg. Bookmark the permalink.