This is a long overdue post..so let me go back to the beginning!
We went to Ireland to get a new work visa for folo since the foreign registration office here was sick of giving him extensions. Turns out the Consulate in Dublin also didn’t want to see him! They told him/us that he wasn’t supposed to come back for a new visa for 5 years. What?! after some wrangling with them, they finally agreed to give him a new 1 year visa, but said that they would not issue him another new visa for the same company for the next 5 years. Grr. They are so strange. And of course it took the entire 10 business days to get the thing. We only knew less than 24 hrs before our departure time if he was going to get it.

This is contrasted sharply with my visa experience in the US where I took my paperwork in at 11 am. and picked up the 5 yr business visa at 5:30 the same day! I was stressed out about not getting it, but seems like even with the outsourcing it’s still as easy as ever. 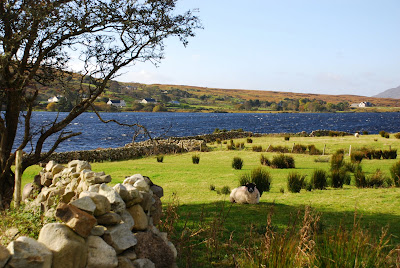 During the processing of Paul’s visa, we decided to finally see a bit of Ireland. I’ve been there at least 6 times now and still haven’t seen anything besides Dublin and his brother’s house in Waterford. We took a gamble and rented a car. thankfully automatic. We then set off for his brother’s house to see his new neice Katy and then we cut across the entire country to the west coast where Galway is located. Amazingly I did great driving there – I thouht I might make some mistakes since they drive on the other side of the road, but I guess India has gotten me quite used to it. I also rocked on the round-abouts which was good since they were everywhere!

Word of warning.. GPS doesn’t work that great in Ireland! We were ‘in fields’ more often than not while our little GPS friend ‘recalculated’ constantly. haha. While in Galway we took a day trip up through the northern countryside which was beautiful. Now I can see how people just love Ireland..it’s really the countryside that does it for people I think. Another day we drove through the Burren to the Cliffs of Moher. 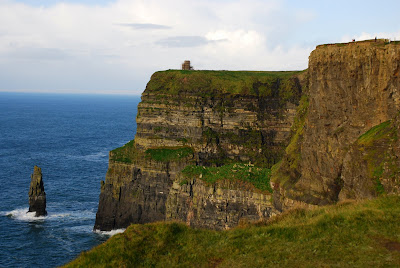 Even though it rained about every 10 minutes, we somehow managed to get quite a few photos of sunshine. And the photos don’t show how blustery cold it was out there either!
After a quick visit in Ireland we headed to the US for an even quicker visit – a total of 6 days. I got my visa and international driving license without hassle, so our remaining days were filled with seeing a couple of friends and buying things for our rickshaw run.
During our stay was the US Presidential election. It was really great to be there for it. I was super emotional..not sure that I have ever been emotional during an election, but this was just fantastic. Seeing the streets fill with happy people and to finally have that proud feeling again was more than I can explain. It was strange too, as all of my friends abroad all felt the same way.. we could finally proudly say we were from the US..while others rejoiced and said “we can finally go home”.
And now we are back in Mumbai preparing for our move. We thought we’d be moving 3 days after returning, but looks like it’s a bit behind schedule (as is typically India!). But it worked out for the best since I’ve been super jetlagged and there was probably no way I could have gotten anything sorted so quickly.
I am starting to feel sad though about leaving this apartment. Most of our India experience is centered around this apartment, so it feels weird to be leaving it, but not leaving India. I never really thought that we’d move apartments.. i just sort of figured when we left this apartment, we’d be leaving India for good. So who knows what this new chapter will bring.
Moving day is tentatively scheduled for next friday…. can’t wait to get in and start decorating and fixing the new house up. Hope the kitties adjust well.. will be a little glimpse into how they would do moving across the planet!
This entry was posted in ramblings. Bookmark the permalink.