Posted on August 27, 2009 by kkowen
Omg.. It has seriously been forever and a day since I’ve blogged. But really I do think about it often, but my internet has been so spotty the last few months that I get turned away when I can’t even load the page quick enough.
So a quick (in my terms isn’t so quick now is it??) recap!

To recap the previous postings in case you forgot – Stacie left in March Boo Hoo. Adam, Lisa and Andrea came for a two week visit in April – YEAH!! And I spent a lot of these months helping the American Women’s Club organize a charity ball. It was fun, but also annoying a bit. I enjoyed all my pieces, but it made me see clearer some friends I’ve had here for a long time. I didn’t realize the extent of how people can be different when you transform to work life from friend life. Not interested in seeing that again anytime soon! We did amazing though and raised around 15 lakh (close to 30,000 USD or more actually…) I didn’t go to the ball though – it’s not really my cup of tea to be honest. I like organizing things and doing logistics, but I don’t like the stress of getting all dolled up for a night of way over priced eating and drinking of diet cokes.

So instead… Paul and I took off to Bali, Indonesia for a week of relaxation! I needed it after the stress of the ball and he had been swamped doing films and commercials. It was beautiful! We had a great time. It was a true vacation vacation. I’m not usually very good at those. I don’t typically like to go to a destination to just laze around, but that’s exactly what we did! We went to the beach on the north-west coast (Permuteran) and snorkeled and got insanely burned. Boo hoo. But our villa was beautiful and we had an outside bathroom which was super cool. And it wasn’t outrageously expensive. Woo hoo. Then we went inland to Ubud and stayed in a gorgeous villa where we had our own private pool, outside bed, table, bath and then inside bed, bath, etc. amazing! And again not outrageously expensive. 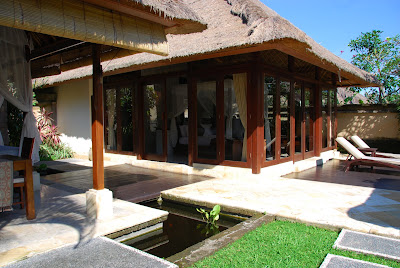 Since we were so sunburned it wasn’t easy to do much, so we lazed around the villa quite a bit venturing out for meals and a touch of sightseeing. One place we went was to the Monkey forest… and Paul got attacked by monkeys! WHAT? You scream… yep. Attacked by monkeys! 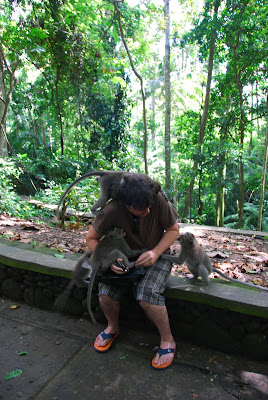 Haha. I was clicking away too. If you blow up the photo you can see paul’s skin in this monkey’s teeth!! What we think happened — a small monkey was pestering some other monkeys and they’d been chasing it. We sat on the wall a ways away, but then in a flash that little monkey had snuggled up next to Paul and we think the other monkeys thought he was protecting it, so they all attacked him – 5 total! He had flesh wounds and all. Oops. And of course he wasn’t too bothered. He was letting the monkeys climb on him within another 30 minutes and he didn’t go get rabies shots either. I would have been hysterical!

The day before we went to Bali I got a call from a job I had all but given up on. I’d applied in Feb, heard nothing for ages, interviewed in March and then still didn’t hear anything until May… they offered me the job, but since we were leaving I said they’d have to wait until I got back and I’d come meet again to discuss the job. I was so irritated though. I had already planned to go to the states for a month then over to Berlin for a month to buy a flat. I even had a free apt in Berlin lined up. But…I took the job of course… it’s as close to a dream job as I’ve wanted here. It’s research, its HIV, I can work from home and I’m considered a consultant (consistent with my visa) and the salary is respectable (nothing near the west, but nothing as bad as ‘local’). Perfect. And I have been dying without real work for a long time. I still do my CORP work, but I needed something with real deadlines, real responsibility and something that would challenge me. Of course they are all a bit unorganized and slow, but I’ve managed to deal with that.

Oh and did I tell you we bought a car? Not a new car, but a 2001 maruti esteem automatic. It’s old and a bit janky, but it wasn’t expensive and I can drive it all over!! I love it. I was scared the first day when I had to drive it home from downtown.. But I did it and I wasn’t even nervous once I got behind the wheel. And then after weeks of trying to get it transferred from diplomatic tags to normal person tags, I finally got to drive it again to my new job – which is 11 km away and takes about an hour and goes through some of the messiest parts of Mumbai (driving wise). And I did it and now there is no stopping me. I seriously love driving around. I find it so easy which shocks me. I find it keeps me occupied and hour long journey’s feel like 20 minutes. I love listening to my ipod again and having the mobility to just go where I want with no purpose in mind. Yeah!! you really can’t understand what a sense of accomplishment it is to drive here. the first few weeks, i seriously would just beem, i was so proud of myself for driving in the insanity and not getting hit or hitting anyone else! Think..2 cm away from other cars, massive pot holes, chaos all around (cows, cars, walkers, bikers, push carts, motorcycles, choas!!)

Back to the job…Since they wanted me to start right away I thought I better go back to the states for a quick visit before getting sucked into a job that wouldn’t let me leave for at least 6 months (or so I thought at the time). So with 3 days notice I found a flight (for the same price I normally pay 2 months in advance!!) and headed to the US for 2 weeks. 1 week in CA and 1 in OK. The one in OK turned into a bit more due to missing my connection and having to wait a few more days.. but that’s ok. Had more Mexican and spent more time with Stacie and my mom. It was a great trip, short, but glad I went back.

Then I got back and was ready to get into work.. Well they are slow like I said, so I didn’t start for another week and then very slowly at that. I read and researched and tried to make myself useful, but only after a month did I start to get the hang of what was going on. At this point, 2 months later I am still not officially hired, nor have I been paid, but I hear that its coming and I might just see 2 months of paychecks on the 1st of Sept. We shall see!!

And… the kicker…don’t get too excited, but we have set a tentative “leave date” for India. We are thinking Dec 2010… my job should be finished in June of 2010 and it will be 9+ years here for Paul at that point, so it’s either dig in our heels and buy a place here or move on for a bit. I can’t imagine not living here, but I also think that it’s time for a break. I think we need to get away for a while and see if we really miss it and want to come back. We can always come back. I’ve seen plenty of people do it. Of course it would suck to ship all of our stuff out of here and then bring it all back again… but we’ll see. But I think a lot also depends on Pauls work and my job. If i am offered a better and greater position doing HIV after this is finished.. then it will be hard to turn down.

And where would we go??? No clue. That’s why it’s a tentative leave date. We think perhaps Berlin as a temporary location to chill out for a while, visit with friends, buy an apt, just enough time to get bored of not working there before moving on to somewhere else… or it could be LA.. Who knows? Only time will tell.

But since we’ve made that arbitrary decision, we’ve made a goal to see more of India in the meantime. Our first opportunity was the other weekend, when Paul had two whole days off.. I had wanted to go somewhere in India, but I had also just gone to the states recently… but Paul wanted to go to Dubai and eat beef. So off to Dubai we went again. It’s summer so over 100 each day with high humidity, but when you only have to walk 500 feet to the mall.. It’s not soo bad. Haha. We didn’t buy anything though – seriously depressing. We are too fat and they already had winter clothes out. So instead we filled our suitcase with a cooler and stocked it full of frozen foods – hamburgers, bacon, sausages, cool whip, cheese, etc. fun fun.

And now we are back into the grind of work and life.

I am looking forward to a trip to Kolkata at some point this year. My friend Clare who used to live in Mumbai then went to London for 2 yrs has made her way back to India. I’ve only been to Kolkata once and never left the hotel (post rickshaw run), so we need to go explore. And I want to go to Berlin in Sept or Oct for a week to try to find a place to buy! Even if it sits empty for the next 6 months at least we’ve invested and have a place to go to there. We’ll see if any of these things happen.

And that’s about it… life is work and work and see a few friends here and there. I miss the west these days. I miss having lots of different friends. I miss being able to fly 2 hrs to another city to see a friend who’s just had a new baby. I miss seeing my friends’ bands tour through my city. But for now I will be happy with the things that I will surely miss here – the maids, the car washers, the chaos, etc.

And just like every year.. it is not time for the Ganesh Festival! Hopefully i can get my lazy arse outside to take some photos. And by the way.. monsoon has been super pathetic this year. I don’t think I have one photo of the rain. we had a mini-flood at the beginning and it seriously haven’t rained for more than 5 minutes since june. Bad news for India my friends. But I must say that I have loved the cooler weather and not so soggy feet. It is already starting to heat up again for our Sept-Nov summer…but at least i’ll have the car to potter me around in this year.

And.. if you made it this far… John Harrison, email me! I think you can click on my profile and email or find me on facebook. would love to catch up. the email i have for you no longer seems to work!

This entry was posted in india ramblings. Bookmark the permalink.