Today we got up late again! I’m not sure what is wrong with us – we go to bed early (around 9 or 10 pm!) and then can’t seem to wake up until after 8 a.m.!! I woke up still not feeling so hot, but managed to push through it. For the sake of time, folo went ahead to the bus depot to get some donuts, coffee and our bus pass while I packed up and got us ready to head to our 2nd hotel in Kyoto! The Granvia is above Kyoto’s main train station and a good base to cover some other areas of Kyoto. It’s a bit more expensive – well double the price of the first hotel, but it’s nice to be in a bit of luxury for a few days. The ryokan was great and all, but we had to be very quiet as the walls are paper thin, we had to share a bathroom/shower with the other guests and our room was no smoking! So it wasn’t quite as holiday-ish as we’ve come to like on our vacations!

After packing up we headed down to the other side of town (about 45 minutes) on the bus and off-loaded our bags until the 3 pm check in. And off we went….

Today we decided we were going to do a walk that was suggested in the guidebook – the southern higashiyama walk. It started off fantastic as right away we saw a geisha walking down the street in front of us!! We were so excited chasing her that we barely even noticed ‘tea pot’ lane that we were trudging up! At the top of the hill there was another geisha with whom i tried to get my photo made with. Apparently she was ‘rented’ out by a group or something?!? so no photo 🙁 (i tried mom!)

The first temple on our stop was beautiful and much more to my liking! We followed the hoards of people around taking photos and then to a small entrance area where we paid 100 yen (about 1 dollar) to go inside. I didn’t really know what was coming except that it said no photos and no shoes – both of which are common at these temples. I read the description which said the room we were going into was to resemble a womb and would be dark. Once we came out the other end we would feel as if we were reborn. Ok.. shoes off, money given and here we go!

Oh my god… I think that had to be one of the scariest things I’ve ever done! It was amazing, but also totally frightening! We started off along this path, holding onto the large prayer beads on the wall, and then all of a sudden it was PITCH BLACK. I mean seriously black. I couldn’t tell if my eyes were even open. I kept blinking them to make sure they were open. But there wasn’t even a speck of light and we were following along in a huge line of people (who i kept bumping into!). I was enjoying it and then all of the sudden i would get this feeling like the ceiling was really low and i was going to bump my head or that I was decending into this long cave like area and wasn’t going to be able to get out. Then i’d start freaking out in my mind about what i’d do if i really started to go crazy with not being able to see… finally i realized that i could always turn on the screen to my camera and that would give me a little light. At one point we were stuck in one place for quite a while – waiting for the people in front of us to move. This is the time when i was sort of mentally freaking out the most. Folo was pressed against me, i was really close to the girls in front of me and we weren’t moving!!!

Finally we made it to the end which was a big stone with a buddha on it with a tiny bit of light. You were to put your hand on it and make a wish and then go back up towards the light. Whew… i sort of did feel like i had been reborn again after that! It took my body awhile to adjust and calm down. I almost wanted to go again!! It was so extreme and so crazy since we really didn’t know what to expect!

I had heard an English speaking guide tell some other foreigners something about it and asked if they had any ?? problems. I had missed the part about what type of problems.. but now I can only assume he was asking if they were clausterphobic!!

After doodling around this temple for ages, enjoying the views over kyoto and having the sun beat down on us (oh yeah.. it was hot and sunny again today!), we continued on our ‘walk’. 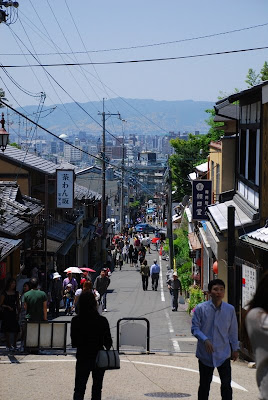 We wondered down a few little lanes with old kyoto homes, traditional style coffee/tea houses, etc. Then we came to another Geisha.. this one being photographed by a professional – with his reflectors and all. I got right behind him and managed to get a few pretty good shots! yeah!! 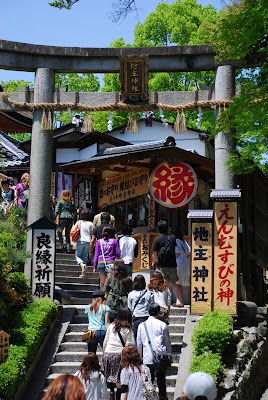 By this point we were getting hot and tired and there were no food options in sight. So we quickly ran through the rest of our ‘walk’ and headed back to the hotel/station for some food. We grabbed some food in this massive underground mall beneath our hotel and then checked into our room. It was defiintely worth the switch. We have a great view over Kyoto, large comfy room, tv, cold AC and our very own bathroom!! Folo napped for a while, moaning about his hurting feet (something I do on a daily basis!) while I enjoyed the free internet and caught up on this blog!

Dinner time!! We had planned to go to this tofu restaurant that was mentioned in the guidebook. It took us about 30 minutes to figure out the route and head off. We got there.. with no problems.. only to find that it has been closed for ages! (darn you lonely planet — you always let me down like this!) But we had a wonderful exchange with this really nice japanese lady who was having a pottery exhibition. She told us where to find this street (Shinmashi Dori) that we’d been looking for for 2 days. So again, we figure out our route and head out. Again, we made it — with the awesome help of locals who would chase us down the road to give us better directions after they had already pointed us in the right direction.

The first dish to come out looked like pudding or something! He told us to put some salt on it and then dip it in the soy sauce. I’m not really too keen on having soy sauce as it usually makes me sick (MSG), but had to do it anyway since the tofu /pudding was tasteless! Then paul’s place of fish came out and we figured out what it all was by the phrasebook. He loved all of his, but I was left still starving and not at all satisfied with my “tofu” restaurant!

Oh well.. it was an experience and the guy was super nice and welcoming (as all Japanese seem to be). Now we headed off in search of this Sake bar that I also read about in the NY Times article. We pottered around for ages asking everyone in sight, but somehow couldn’t find it. Now we have looked online and will try again tomorrow. So still no food for me.. so we decide to head to our now favorite area Sanjo Arcade. We decided to try a new sushi place – the one actually recommended in the guidebook (we tried to find it the first day, only to eat at another one and then see it after we left the first one!). We sat down and i realized that there was nothing there i’d eat… i just can’t stomach raw fish! So as embarrasing as it was, we got up after they served the tea and headed to our first sushi place. Yum yum. more veg sushi and fried shrimp! And a second dinner for paul.

Stuffed, fat and with aching bones, we headed back to our wonderful hotel. Paul is content watching tv and i’m enjoying all of the space!

Tomorrow is another full walking day… not sure how our feet are going to manage all of this walking for 3 weeks! But we are loving it and enjoying almost every minute of being here! Almost feels like home already! We even contemplated just staying here for 10 days and tokyo for 10 days…. but I think we’ll probably still head out on Friday and see something new. Til tomorrow. (Oh and I’ll go back and post some photos with each of these entries… just too lazy to dig for the photo cord now!)