Another day in Kyoto and we are loving it more and more. As is usual with us, we look around and think “Hmm.. Could we live here?” The answer so far is a definite yes! Folo feels like we’ve done lots already, but looking in the guidebook and passing the thousands (there are 2000 temples in Kyoto!) of temples, I feel like we’ve done very little! But I guess you need a reason to come back right?! (I do want to come back.. once in the winter to see it with snow and sometime in my lifetime for the cherry blossom festivals).

Today we got lost for the first time… in our ‘building’! Our hotel is connected to the main train/bus station in Kyoto. This station is massive. It has several shopping malls, millions of trains, buses, etc. We were looking for a grocery store to buy cheese for a packed lunch and ended up totally lost… and in front of McDonalds! I normally stay away from McD’s but when it’s breakfast I’m easily lured in as I love their egg mcmuffin and hashbrowns! So we relented and had a western breakfast…. and it was yummy!

With full bellies we wandered around for a while, finally finding a grocery store and our way out! One note about the grocery store.. when we walked up to the counter, there were about 10 ladies at different registers. As soon as we started approaching they all started bowing and saying welcome or something nice in Japanese! It was a bit overwhelming to be honest. Then as we left they all started yelling other polite goodbyes or thank yous.. I think I was blushing when we left!!

Our plan was to head to a big temple complex called Nanzen-ji. Several things I have read have said it was their favorite temple, so I had high expectations. Getting there was fine, but then once inside the compound we had no idea what was going on – where the temple was, etc. All of the many maps were in Japanese only, there were no hoards of tourists to follow and it was hot!

Finally we managed to find our way to a garden.. which was pretty boring to be honest. So much for that 5 bucks! But then we decided to go through this little lane up into the woods. It was a hike, but nice and quiet and good for our little pik-nik snack!

Heading down, we were set to find this restaurant that we’d read about..It specialized in Kyoto’s special dish – yodofu pot. We knew it would be expensive and traditional, but were willing to try it out for some local flavor. We found it easily and headed in. As is typical with the traditional places, you must take your shoes off before coming in and you sit on the floor on tatami mats. Folo isn’t so flexible, so was a bit worried about the floor sitting, but he managed to do fine (with a few beers!)

The meal was a set meal of 6 courses. The first course was a potato soup.. which i would normally love. But this was cold and very slimy… kind of felt like spit!! Paul drank his down of course and i sipped at it slowly! Second course was cold sesame tofu with wasabi on top. It was good.. just difficult to eat with chopsticks! Next came tofu on bamboo sticks with a cold, sweetish soya paste. I loved these, but Paul didn’t really like his as much. 4th course was a plate of tempura – yummy! 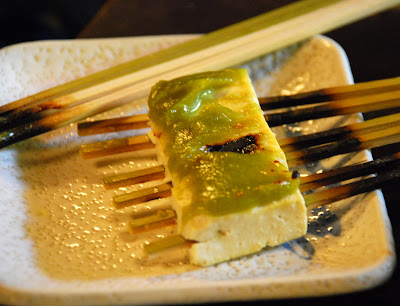 Number 5 headed out.. this was the tofu in a boiling pot (that is boiling on your table). You put a slab of the tofu in your dish, cover with some onions and pepper (lots of chili for us in our indian-ness) and a little sauce. Pretty good.. but we had 5 each and I could barely get down 2.. Folo got down 3! And last was rice with two peices of pickled radish. It was chewy and crunchy… sort of tasted like a pickle but a different texture. For 60 USD i’m not sure it was so filling, but it was the experience and that was definitely worth it!

Not stuffed, but full enough, we headed back to the path of philosophy to see one of the most famous temples here – Ginkaku-ji (Silver Pavillion). Unfortunately the temple itself was under construction, but the gardens were well worth the entrance fee. This was the first garden that I really felt was “Japanese” in what I had in my mind. Even with aching feet and hot and sweaty I really enjoyed this the most. 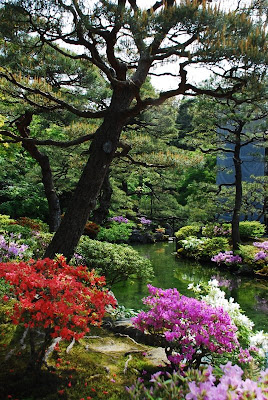 Again, we headed home for an afternoon rest… somehow our feet are not up to the task of walking 10 hrs a day! I have no excuse since I do so little in India, but Folo works in a dark room all day, so he has a reason for not being able to handle the walking!

Night falls in Kyoto and we head to Gion.. the Geisha district. We pottered around, looking in all the shops and taking photos before heading to a tiny alley called Pontocho which has lots of bars and restaurants. My only hope here was to see a real Geisha on her way to/from work! And that we did see!! She was actually with a man going somewhere! 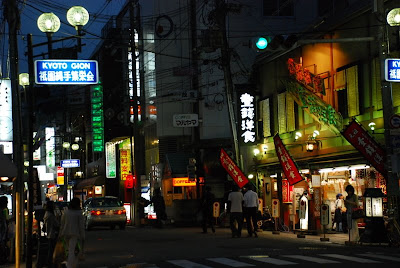 We found a small little place to eat dinner that had the chef in the middle of the place so we could see all of the cooking. We spent a fortune again.. but whatever we had to sample things! Grilled salmon, fried pumpkin, fried cheese, grilled eggplant, asparagus wrapped in bacon. And Folo finally got to sample some sake! He was scared he’d not be able to walk out after 3 beers and a small sake (which is about 4 small cups). He managed.. and luckily for him he could no longer feel his aching feet!! 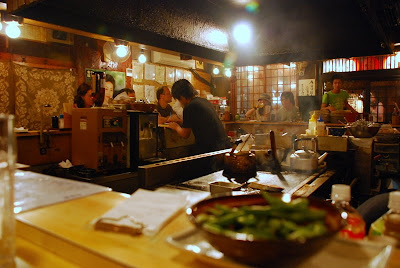 And not that anyone really cares, but we have been keeping track of all of our spending so we can figure out what our average daily costs are. Doing anything and everything we want, we are spending on average 140 Euro’s per day including shopping and accommodation. Not so bad.. our theoretical budget was double that. And as Paul always likes to say.. its less than 75 Euro each per day (even though it’s all coming from only one bank account!) It’s good to know that we can continue on as is and not go over budget!! Some days are cheaper, some are more expensive. Today was an expensive day I think!

All in all.. we had a great Kyoto day today. We have tons still on our list of to-dos.. so we’ll see if we can get up bright and early and get it all done! Friday we head out to Nara for a night to see the largest wooden temple in Japan. Tomorrow should be an active day.. plans include the Manga Museum (Japanese comics), two temples, booking train tickets, possible geisha dance show, and some shopping!!