Today we sucessfully got up and out of the hotel early! Yeah for us! Even with all that sake, Paul managed to get up without any struggle. Maybe that is the trick 😉

We headed down for breakfast in the station and then onto the train to Fushiri Inari temple. This was in Memoirs of a Geisha (i think). It was a huge complex with trails leading up the mountain all covered in these red/orange ‘tori gates’. 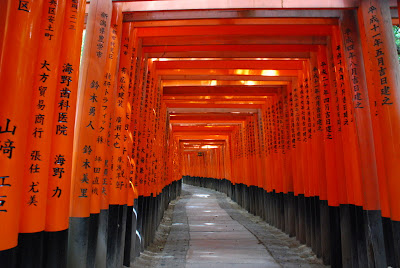 It was cool and chill.. we just wish we had all day to wander around the mountainside. It would have been a wonderful area to spend a full day trekking and having a picknick! But time was of the essence today since it’s our last day here. So we saw enough to wet our appetites and then headed on. It finally happened.. Folo lost his train ticket! When we were in SF last summer he lost his bus pass two times in a matter of a week! So, I was getting surprised since it had already been several days and he’d not lost anything!! haha. But he lucked out and the guard trusted us and let him go through without buying another one.

Then we headed to the Manga Museum. It wasn’t quite what we were expecting. For some reason we thought it would have exhibitions showcasing old Manga. But instead it was like a huge library that had over 200,000 manga editions. Interesting, but not quite what we had hoped. Nevertheless, Paul bought a cool tshirt and some post cards that we might frame. 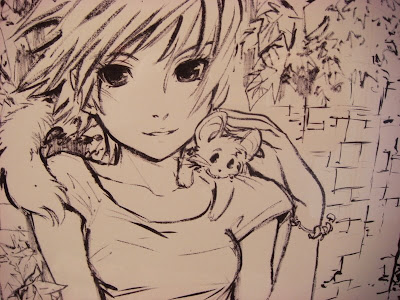 We headed back to the main station for a bit to dump our bags and to also get some time to tour around the station area. Did I already say how huge it is? It has a 10 floor department store, several malls, movie theater, long distance trains, local trains, our hotel and tons of eateries! Also a garden on the roof! It was cool to doodle around here for a bit.. we are just starting to get our barings here and not get lost in the station itself! 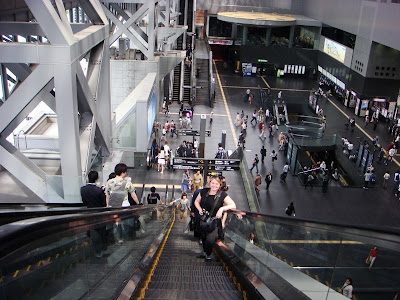 To keep on our busy schedule we then headed to another temple that we just realized we should see! It’s the Heian Temple. This one was pretty cool also. Apparently the garden was in Lost in Translation.. will have to watch the movie again to check it out. We pottered along behind a tour group so didn’t have to pay (if there was every a place to pay — we aren’t quite sure! The guidebook says its 600 for the gardens, but we never saw anyone taking money!). The garden was great and we managed to get a ton of photos. Also saw a lady fall in the pond which was pretty funny. so mean.. we laugh at other’s misfortune!

Enjoying this run of activity we headed out to find this shoe shop I’d been dying to see. It’s called Sou-Sou and specializes in ‘toe’ shoes. Basically the shoe separates your big toe from your other toes. They look a bit silly, but are sort of cool at the same time. I really wanted a pair, but couldn’t manage to find any that fit just right. They have a shop in Tokyo, so I got the address and will try again there. I’m hoping that my feet were just too swollen and sore to fit anything properly! But Paul did manage to get a pair.. not the toe kind, but just regular ones that look similar to converse, but are black and black stripes. Pretty adventurous for him!

Sad and disappointed about the shoes, we headed to a sock shop so I could at least buy some more cute socks. Bought some with pads in the soles.. but once I got out of the shop and put them on I found they didn’t fit. POOHIE! Next stop..Clarks, so I could try a pair of shoes on again. I ended up buying them, but within 10 minutes of walking out of the shop i already had blisters 🙁 Definitely not a shopping day for me. But luckily we happened upon a Gap and I found a pair of leggings on sale for 10 USD and that fit! Also got two pairs of my no show socks that i know will fit. Things were starting to look up! But we were getting hungry and tired so headed back home instead of continuing on our shopping journey. I think there will be plenty of shopping in Tokyo, so we better save some room!!

Didn’t make it to the Geisha show today, but added other stuff which ended up being more to our liking i’m sure. Sleepy and hungry we’ll probably just get something in the ‘station’ and then relax tonight before we head out tomorrow. Our bodies need a bit of relaxation I think.. and this is a vacation afterall!

Observations for the day: