Today we got to sleep in a bit and have a lazy morning! Much needed for our feet! We pottered down to the station and got breakfast and checked out train options for getting to Nara. Simple enough so we just chilled out in the room packing and watching CNN until it was time to head off.

Nara was the original capital of Japan long ago. The main attraction here for me was Todai-ji Temple which is the largest wooden building in the world and houses some massive buddha’s as well.

We sucessfully navigated the train (only 40 minutes) and walked to our hotel. The walk from the train station was only about 10 minutes and was through covered shopping arcades which seem to be the norm here in Japan. I love them!! On the way to the hotel I saw my all time favorite shop – Muji and was happy to have finally found it in it’s home country!

We had booked another traditional japanese inn (ryokan). We couldn’t check in until after 3 pm, so we dumped the bags and headed out to explore. We ended up doing an entire walking circuit (5 km) that was planned for the next day. To our great joy, there were deer (or as I called them reindeer) all over the place! They just wander around, getting ‘reindeer’ biscuits from tourists, kids and locals alike who are willing to dish out the 150 yen for a pack! They are pretty rambuctious when they see you buy the biscuits, but aren’t too aggressive. It was so cool to be able to pet them, touch their horns and noses and just google at them! Even the most hardend traveller was enjoying the deer! We saw groups of buff male western travellers surrounding the deer for ages with smiles and laughter! 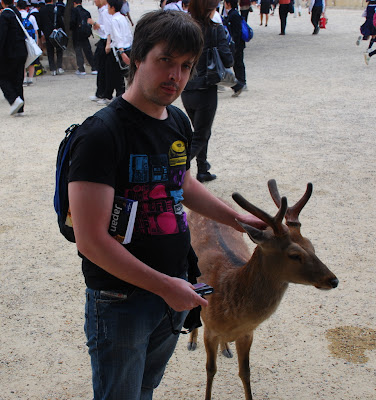 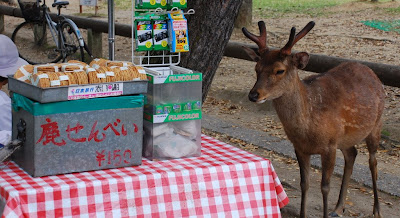 After getting over the initial novelty of the deer, we continued on our walk. It was a nice day although it had gotten a bit cool and looked like it might rain, so we thought we better do what we could. We followed gangs of school children down the walking path heading towards Todai-ji. I was highly amused by how all the groups of children (when i say group – i mean like 100+!) are kept together…. they all have color coded hats on! We saw red caps, blue caps, white caps, yellow caps, pink caps, white with red strip, white with yellow stripe, etc. Only after arriving at Todai-ji did we take out the book and learn that this is a huge destination for school outings so you are almost always assured of massive crowds.

Somehow the crowds didn’t seem bothersome though.. The deer all over are so entertaining that people seem to be sort of dispersed throughout and not all grouped together. The building was massive and is apparently only 1/3 it’s original size. And the buddha’s within were amazing as well. It was a bit dark, so we’ll have to see how the photos look. 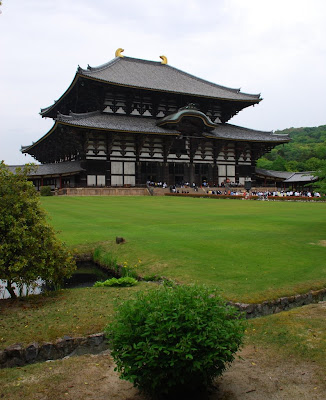 There is a tree sort of thing inside the temple that has a hole in the bottom of it.. it is supposedly the size of one of the buddha’s nostrils. If you can crawl through the hole you are supposed to be assured of enlightenment. The kids love it! They all line up to get a go. Folo really wanted to do it as well, but was scared off when we saw a grown Japanese lady (skinny and tiny) almost get stuck! I was egging him on along with another random foreigner, but he got too scared! Haha. probably best.. if he got stuck I might have had to walk off and pretend I didn’t know him 🙂

Continuing on our trail, we walked up to some area that was supposed to have great views over Nara. Unfortunately it was pretty cloudy and overcast so our view wasn’t so spectatular!
Again we meandered along – me moaning with aching feet! I hadn’t been able to put on my real shoes and was in not so great walking shoes! But we happened upon some great shrines and temples with little crowds and lots of photo opportunities! 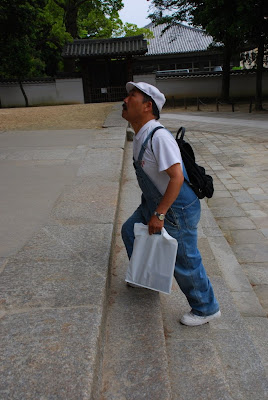 (this is a photo of a random guy we kept seeing who made us think of mario! doesn’t he look like super mario?!)

We slowly made our way back to our hotel and did some ‘house cleaning’… i.e. laundry! Luckily there was a washing machine and dryer so no hand washing for me! Set the laundry in and headed out to find dinner. Apparently this town closes super early! It was only about 6:30 and the streets were dead empty and the shops were closed! It was even a friday night! 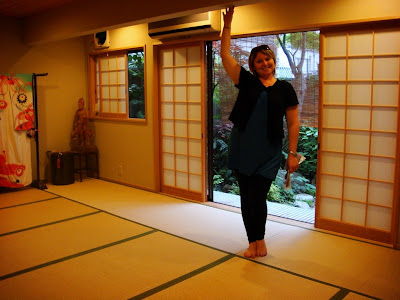 We found a nice place near our hotel that served traditional settings of food. Paul went all out and got a huge sample type meal and I got my good ol standby of tempura! The food was great, but all I got was 7 peices of vegetable fried up… when I say 7 peices i mean like 2 peices of string bean, 1 slice of potato, 1 seaweed, and some other tiny little veggies! I was by no means full after dinner while folo was stuffed! So we headed to circle k for some dessert! oreo cookies and kitkat are about the only western items you’ll see in shops here.

After walking around a bit more and realizing everything was shut and there was little for us to do, we headed home. Our wonderful ryokan owners convinced us to have a traditional hot bath in their ‘onsen’. It was nice.. a big tile tub (kind of like a spa, but no jets) in a room that is baking hot. It was definitely nice since it was a bit cooler outside. But it sapped any remaining energy we had and we were both fast asleep well before 9 pm! lol.