Since we didn’t have much planned for today we didn’t even attempt to make it out of the hotel before 10… which is late for me since i’m usually up by 7! And unfortunately we just barely made breakfast with only 15 minutes to spare 🙁

Headed over to the hiroshima atomic bomb musuem which was excellent. We were there for over 2 hours. The exhibits were layed out well and all in English as well. I learned quite a bit about it all. Did you know that dropping the bomb on Hiroshima was basically an experiment?! I didn’t realize this, but the way it was set up was to find out the effect it would have, how wide of an area it would cover, the after effects, etc. And I didn’t realize that the UK and US governments had decided beforehand that Japan was the best target even though we were in war with Germany.
After that we headed to another memorial hall for the victims and then headed for lunch! We settled on western for lunch… Subway had a special avocado sandwich that I just couldn’t resist! I never get avocado and I always crave it in India, so I was a happy camper. And to top it off we went across the street for haagen das coffee ice cream! Full of western food we decided to have a little rest and check online for our trains for tomorrow. It’s going to be a busy travel day!
After resting we roused ourselves up and headed about 1 hr outside of hiroshima to an island off the coast called Miyajima. The whole point for our journey was to see a ‘floating torii’ that is one of the top 3 photographed things in Japan.
Upon our first glimpse we were disappointed. It looked so small and in the photos we’ve seen it looked massive! But once we got there and started getting in the water to take photos, we were enthralled! I think we spent a good 2 hrs taking photos from all angles and sky colors! So it was worth our late journey over there. 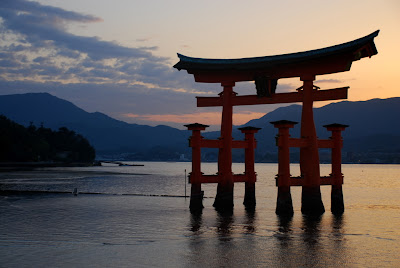 Getting back to Hiroshima it was getting late and as seems common here things were shutting up for the night. Its hard to remember that things close by 8 at the latest! But we knew our dinner from last night would still be open! There are 27 ‘cafes’ in the building so something would have to be open. And luckily one place still was. So we had the same dinner as yesterday and it was still as good. (always a worry that the first try will be good but the next time it doesn’t live up to the hype you create in your mind!) 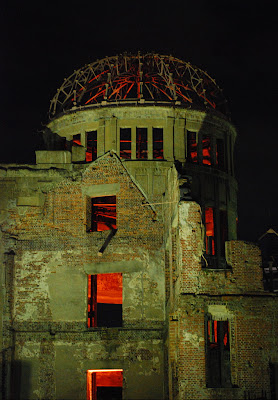 And now we are back late and getting ready for an early start tomorrow. we are heading out around 7 to hit a castle on the way to the mountains again. And with our luck the warmish weather won’t follow and we’ll be freezing again 🙂