Rise and shine was around 6 (earlier for me) so that we could be dressed and ready for the buddhist prayers at half 6. Folo got up with a little nudging, but when the monk came barging in to force us to prayer he got moving! hah. I need these guys with me all the time to get him out of bed!

It was absolutely freezing this morning.. and still raining. We could see our breath! We were hearded along with the other guests (very few were foreign actually) to the prayer. Paul did very well sitting in meditation style for the half hour prayer. He couldn’t walk though by the end! haha.

After prayers we headed over to watch the morning fire ceremony. This was super cool. I had never seen anything like it before. Folo was thinking he wouldn’t be impressed, but after the flames reached 6 ft he was feeling more impressed.

Still aching with sitting and the cold, we headed back to our rooms for breakfast which has been laid out while we were gone. It was traditional Japanese breakfast. I did ok with this type of stuff when I was in China, but I wasn’t so good with it this morning! I just couldn’t stomach much of it. I managed to have the tofu and seaweed and plain rice. The soup and pickled radishes were pushed over to folo’s plate! Still hungry I just had to power on. It was my choice to not eat all the food, so I had to manage!

Deciding that we were going to go ahead and leave as scheduled today, we took advantage of our early morning to do our last bit of exploring. I would have loved to stay longer but with the cold and rain, it just didn’t seem worth it. I was doing ok as far as clothes.. i had my leggings on under my jeans, two pairs of socks, my shawl, hoodie and rain jacket along with my beanie that i use for my camera! Paul on the other hand was frozen in just jeans, tshirt and hoodie! 🙁

But we carried on and did a 2 hour audio guided tour of the cemetary shooting away before heading down to meet our train at 11 a.m.

Now the fun was to begin all over again… bus to cable car to local train to osaka train station to oaska subway to shinkansen (Bullet train) to street car tram! It felt that most of our day was spent travelling, but we did manage to do quite a bit as well. We activated our Japan Rail pass tickets which means we no longer pay for our trains (paid in advance), had a green tea/oreo cookie mcflurry and finally got to sample the famous bullet trains.

They have smoking cars and non smoking. I typically don’t like to be in smoking cars, but since it was a short train we decided to try it out. It wasn’t too bad.. but still I think I’d prefer the other where we can go smoke when we want! The train was nice though. big comfy seats that recline quite a bit, personal ashtrays and cup holders. Nice clean bathrooms as well! But man.. they do go fast! I could barely look out the window without feeling a little quesy!

After a long day, we arrived to hiroshima around 5 pm and loved it straight away. It is very modern but seems very nice. We checked in to our business hotel and realized we were on the premium floor (and it was cheaper than our other ones!). woo hoo. Oh.. so nice to have a real bed again. Two nights on the floor has been enough for me for a few days! 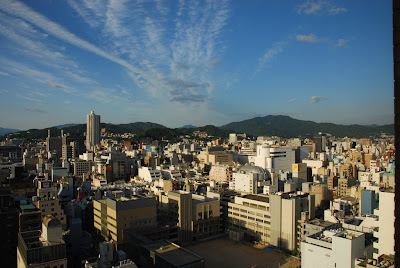 Since it was still light out we just dumped our stuff and headed down the street to check out the Peace Memorial (site of the atomic bombing). We loved it all.. so many photo opportunities, beautiful sky, nice cool weather, but sunny and very walkable. We saw most everything on our agenda (again), but know we want to go back again tomorrow to do the museums! 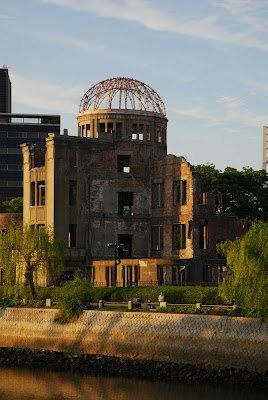 Dinner time… Still starving from lack of a proper breakfast or much of a lunch, we headed out to find a recommended ‘hole in the wall’ that served authentic hiroshima food. No such luck… this LP guide sort of stinks! But we chose another option from the book and hit gold! It was this non descript building near a mall (that has muji and gap next door to one another!) that has 3 floors of tiny bar stool eateries. All serving authentic hiroshima food. The dish that is famous here is called hiroshima-yaki. It is basically a thin pancake type thing on a griddle, with sprouts, some other stuff, udon noodles, fried egg and other seasonings. It was yummy and very filling. Finally we don’t have to have a second dinner!! And i was even too stuffed for my coffee ice cream that I finally found. There is always tomorrow….. 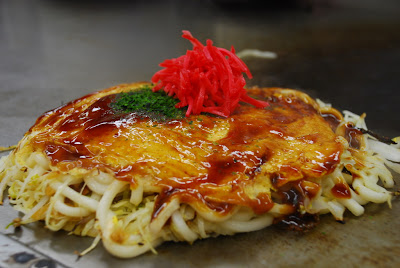 It’s cool out.. well pretty chilly actually, but feels quite nice after the freezing cold of the mountain! And having gotten up at dawn, we headed home again for an early night. One of these days we really are going to sample the nightlife! Perhaps tomorrow since we don’t have much on our agenda. I will post photos later as well. For now.. night night.