We woke up bright and early today – mostly for the free breakfast, but probably also because it gets light here at 4:30 a.m.! Managed to get down for breakfast by 7:30 only to enter a world of chaos! Apparently this hotel is a big hit with senior citezen tour groups and they were all at breakfast. This is the first time that the Japanese effeciency and organizational system has truely broken down.

Our breakfast tickets were taken and we entered into the ‘arena’ (which is what it felt like jostling for space and food!) to go around the circuit for our food. The eggs were almost liquid and cold all the ladies were complaining, the bacon was barely toasted, most bowls of food were empty and it was utter chaos in there. We had our meager selection of food and then went around looking for a place to sit. As soon as we’d find something, we’d see it was already taken. After 10 minutes of looking around, we finally started asking people if we could sit with them. No one would let us!! And finally folo found a free, clean two person table with no ‘reservation’ markings (empty tray, juice, etc). He rushed over only to be told by the head waiter that it was for this older couple. I was starving by this point, so I just rested my tray on the side and tried to start eating when i dropped my entire tray and broke everything – in front of the entire crowd. So embarrasing! But it wasn’t my fault.. if they wouldn’t make us walk around for 30 minutes looking for a table I could have not tried to eat standing up! Embarrased and annoyed, we left our trays (well my broken one and folo’s full one) and headed out.
Complaining to the front desk didn’t seem to do anything as the lady on staff could barely understand English. Oh well. So instead we headed to the nearest corner store and got some rolls and diet coke. Not the best way to start our early day, but what can you do!
Since we were up and about so early we headed out to the morning market which is recommended. I must say it didn’t look so much like a market, but rather a regular day on a street in India! Little stalls lining the road with a bunch of foods, knick knacks, etc. But the great thing here is that each stall has samples! Free food! So we went along sampling all sorts of random things. Most of it really good. This town is known for its salty crackers (like big thin breads) and rice ball skewers. We bought many of these rice ball skewers throughout the day. 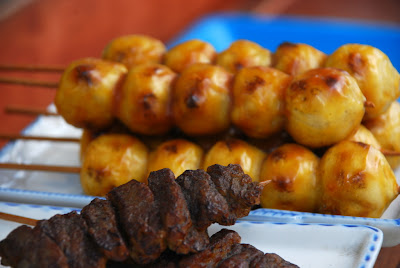 They are yummy. Paul even found some “Hida beef” skewers that he loved. 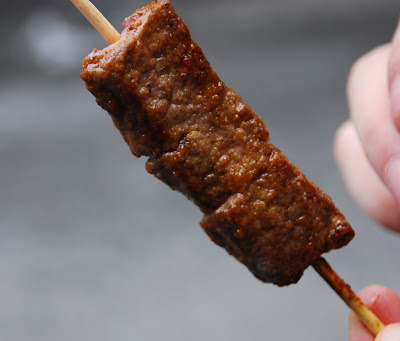 This area is called Hida (maybe like the county??) and they are also known for their beef. But I’ve not seen one cow anywhere, even on the train journey in. hmmm.
It was nice to have a leisurely day with no real plans and nothing urgent that we had to see. So instead we walked around seeing all the old traditional store fronts, visiting sake brewerys (where folo got to try them for free or a small fee) and taking photos. 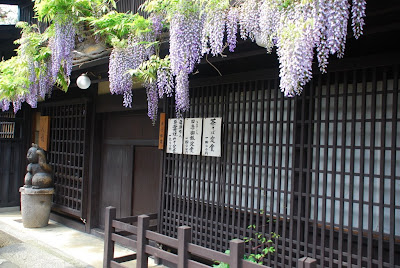 It was raining off and on throughout the day, but never hard and it was almost always still very sunny, so it was actually very nice. And actually a pleasant cold which was just beautiful! I can’t even imagine the heat and humidity that awaits us back in India!
Realizing there was one thing we wanted to do, we headed to the bus station to head to the Hida Folk village. It’s basically a ‘village’ that was put together from old houses in the region to show visitors how life was in this area throughout history. We thought it might be a bit kitch, but it was really nice and interesting. And they had a carp pond which folo has become obsessed with – kind of like he was with the deer in Nara! He loves feeding the animals here. I think I have rubbed off of him too much in regards to animals. 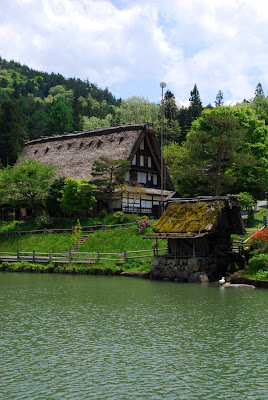 Pottering around the ‘village’ doing my stamp tour and just enjoying the lovely views of the mountains around made for a lovely afternoon. (Note on the stamp tour – I’m such a child… at a lot of these tourist attractions they have little stamp pads to commemorate your visit. I love them. So cute). I only got 4 out of 6 of my stamps though.. must have not followed the route properly!!
Heading back to town, it was time for lunch. Now it has become common for us to have meal #1 and meal #2 – usually because I can’t eat anything at the first place or because folo didn’t get full from meal #1. The last few days though we had been lucky and only had one meal for each meal time. Not here! The specialty here is hida beef curry and places that have that tend to not have anything else. So Paul had his beef curry and then we headed to a noodle bar to have my noodle soup!
Full and relaxed we headed home for an afternoon nap! Luckily after waking up from our nap, the day trippers were gone and the tour groups had departed so the town was basically ours. We spent hours on a few streets taking photos. During our photo session these little fluffy white things started flowing down our street. It was like a tree pollinating, but also like little snow flakes. You could see their ‘route’ coming down the street, around the corner and around another corner from near the river. It was pretty cool and interesting. No idea where it was coming from though. Within like 20 minutes the ground was covered in this white fluffy stuff. Fun! 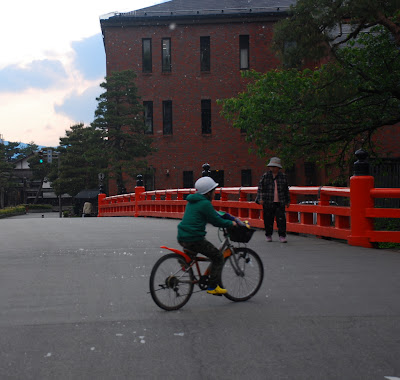 (see this white stuff on the ground and flowing in the air?? its the ‘snow’!)

With the entire town shut by 6 pm, we headed for dinner! We chose this place Origin from the guidebook that said it had beef and veg plates. Score! or so we thought. Paul got 6 thin slices of beef that he had to cook himself and I got a tofu steak. I was full, but folo was still starving! haha. We aren’t quite used to these tiny japanese portions. We think they must follow the rule of 6 small meals a day.. but i’m not sure it quite works when you have them back to back!!
Feeling a little sick to my stomach we headed back to the hotel to gather our laundry and let me get over my sickness. Luckily it passed and I didn’t face any MSG problems. (I’d had a lot of soy sauce today so thought it might be taking effect!)
Dropped our laundry at the laundry mat. Machines that wash and dry and dispense detergent!!! It was so cool. We weren’t quite sure what was going to happen, but we loaded the clothes and put it on a 60 minute cycle before heading back to the mexican restuarant for some snacks and beer. The chef/waiter/owner was happy to see us back again. And even though I was full I did enjoy those chips and guac again!!
Right on time we made it back to our clothes and found them totally washed and dried. So cool! I wish we had these all over the world. Granted the machines aren’t cheap – 900 Yen for a load (about 9 dollars), but it is worth it. They even had ‘sneaker’ machines there. Folo wouldn’t let me try his new shoes though…
And now time to get online and figure out our next day’s plans. Its not easy finding hotels at the last minute and most of the places aren’t cheap regardless. But we can’t ever make up our minds too far in advance, so we have to spend some time the night before we leave making the next days plans! We’ve opted for taking the bus to our next destination even though it’s not on the rail pass we bought. its shorter and takes us directly through the Japanese Alps. Should be an interesting day. And we are counting down to our arrival in Tokyo!!!
This entry was posted in japan trip. Bookmark the permalink.