Day 11: Ride through the Japan Alps

We are turning into early risers and its a good thing too! Breakfast wasn’t chaos this morning which was nice, but the food was still terrible. But we ate plenty regardless – its free!

Having a decision on whether to walk around Takayama a bit more or head out earlier than planned, we decided to head out on the 9:40 bus to Shin Hotaka. Our main point in changing our route was to visit Shin Hotaka for the Cable Car/Gondola ride in the Japan Alps. It’s the longest gondola ride in Asia. And this is probably the only place in Asia that I’d trust going on something like this!

The 1 hour bus ride from Takayama was through some beautiful scenery and got the whole bus ohhing and ahhing as we saw our first snow capped mountains. And then around the bend they were all around us. People were snapping photos left and right. I love mountains and add a little snow on top and I’m ohhing and ahhing with the best of them!

I wouldn’t say the mountains were too dramatic. Nothing like the Swiss Alps, but pretty spectacular nonetheless.

Arriving to our destination we were at a quandary with what to do with our luggage. The lockers would hold only one of our backpacks. Luckily the tourist office was nice enough to hold the other one (for a fee) so off we headed walking up the mountain. Tickets were not cheap, but its ok.. we knew this was going to be an expensive excursion.

The first gondola was packed tight, so we decided to wait the 30 minutes for the next one and be first on to pick the good seats. During out wait we pottered around looking at the boiling eggs in the hot sulfur spring water (stinky) and beautiful mountains surrounding us. 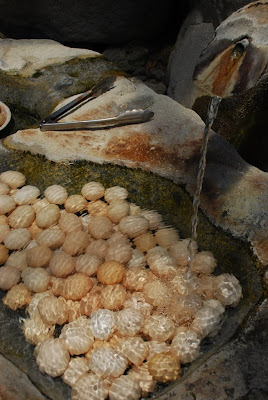 Our turn for the ride… It is split up into two cable car rides. The first is about 5 minutes and just goes up about 1500 meters over the greenery. But that little pop over the first hill gave us all hope for what was in store! That short ride was over and we had to walk a bit for the next cable car. Unfortunately the locals got the clue that it’s best to be on first to get a prime seat, so they were high tailing it to the next cable car along with us. 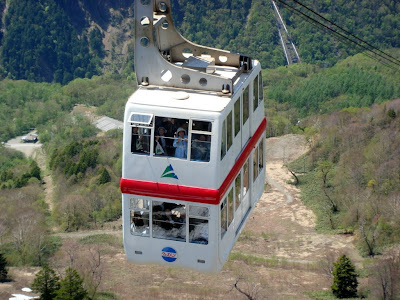 Thankfully this cable car was a double decker, so we weren’t packed in and were able to move around to see all the gorgeous sites.

Once to the top there was a 4th level viewing platform. We were graced with perfect weather for this adventure. The sky was clear blue with a few fluffy white clouds and clear all the way to another mountain range in the distance. The sign as we arrived said the temp was 0 Celsius (32 F). Burr.. Again all we had on were t shirts and hoodies. But the thrill of being up in the snow and able to walk around it overshadowed the cold and we didn’t really notice it.

There was a funny guy up at the top taking photos for the visitors. He’d do all these silly things to make you laugh. We did it and we even got to hold monkey babies! Not what you think… unfortunately. Takayama is known for it’s stuffed doll that is called a monkey baby. Grannies used to make them in the war for the kids and now the town and region is known for them. See photo! 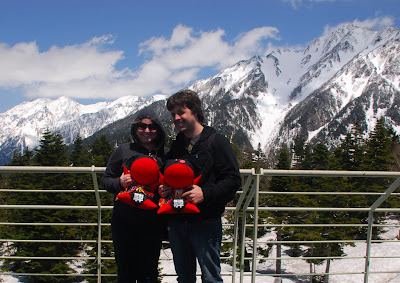 We didn’t have as long to potter around as we probably could have – but we were on a schedule.. the buses don’t run too often to this area and we had to catch one to go to the next town to catch another one to take us to Matsumoto before catching our train to Nagano! Busy travel day. 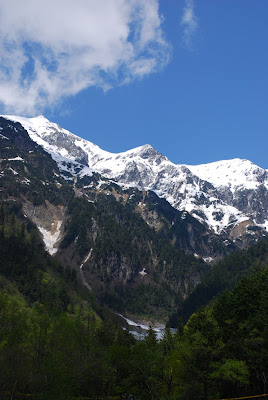 But the scenery along the way was so beautiful. Passed huge dams, lakes rivers, rice fields and went through massive tunnel after tunnel. Paul thought he’d sleep during this leg of our journey but neither of us closed our eyes until we made it into Matsumoto town. We had considered staying here a night, but it didn’t hold much for the visitor except a castle. We have seen enough castles for now and headed on to Nagano.

Considering we took 3 buses and 1 train today I have to say that the public transport system here is amazing! We never waited for more than 20 minutes and they were all super comfortable and efficient. If you were set to arrive at 2:32 – you arrived at 2:32!

Rambling into Nagano (where the 1988 Winter Olympics were held) we were greeted with another city surrounded by mountains, cool air and me with the sniffles. It was probably going from hot to cold to hot to cold so much today, but we had to snuff it out quick so i’d be tip top for Tokyo. Our first experience in the pharmacy went well.. we got some vitamin c tablets and some mystery pill that had photos of a red nose, runny eyes and nose dripping — seems to be what I have!

We wandered around Nagano for a while getting our bearings and just seeing a new town. This one doesn’t seem to close at 6 pm which is nice. We know we are getting closer to the big cities when there are other people on the street at 8 pm!

And waiting till the last minute to book hotels didn’t work in our favor this time. Our chosen hotel only has a room for tonight and sat night, so we are heading out to the monkey park tomorrow for a night…with no confirmed accommodation! I hope it all works out ok.

1 Response to Day 11: Ride through the Japan Alps