Posted on May 17, 2008 by kkowen
This morning we got up for breakfast that was prepared by the hotel. I typically don’t like to get the breakfast included as it’s way over priced and usually not very good. But in small towns like this you really don’t want to be wandering around for hours trying to find anything that resembles breakfast!

Our breakfast was to be held in the terrace… we walked down to a basement room. I guess this is the terrace 🙂 There was a Yamaha piano playing itself for us — keys and foot pedals moving and all! A cool peice of furniture down there was an old 45 record jukebox. But that wasn’t playing for us 🙁 Breakfast was uneventful. They really tried, which was good. The bread was excellent and the Frosted Flakes were very welcomed to our breakfast starved selves.

Over breakfast we tried to determine what in the world we were going to do with this ‘extra’ day. We could take off and head to Hakone for a chance to glimpse Mt Fuji, we could go back to the monkey park or go back to Nagano. Nothing much left to see in Nagano, too lazy/tired to head all the way to Mt Fuji, we opted to go to the monkey park again!! The hotel owner thought we were crazy. “Again? Monkey Park”. Yep!! So we showed in the ‘onsen’ downstairs and headed out to our long hike again! But today it didn’t feel so long since we knew the trail and how close we were!

We were a little worried that day two wouldn’t be as exciting.. Oh no worries there. It was just as exciting or maybe more! I wasn’t scared at all today so I was able to get right up in the monkey’s faces – so close that i really had to restrain myself from petting them. They were just too adorable. I was seriously in love with these little guys. And I was happy b/c i got good photos today being braver. 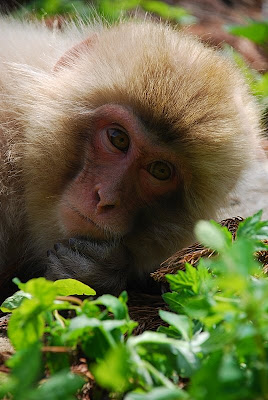 One little monkey was playing with another one near my feet when he accidentally stepped on my foot. He looked at me with such shock! It was so cute! Another time, i was leaning over this bar where the monkeys play on and when i turned around there was this little guy just staring up at me like “what are you doing on my bar”!

I didn’t say in yesterday’s post, but this park is basically in the wild. There are no fences, the monkey’s are free to come and go, this is their home and we are visitors. And they just run all around all over. It’s probably the closest I could feel to being invisible. For the most part they don’t even recognize that you are there even if you are right in their face snapping away. It is by far one of the coolest experiences I’ve ever had. 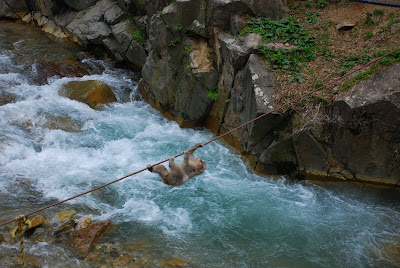 I’ve met with wild animals in their habitat before, but at least with the previous monkey experiences i’ve had they were very scary and likely to snap at you or try to steal your coke out of your hand. These guys were so tame. Not tame enough that you could touch them, but if they came and sat next to you on the bench then it was fine.

I was sitting taking photos of this little baby for ages. He was all alone on the mountain side just munching grass and I seriously wanted to pick him up and cuddle him. He was soooooo cute! And these other ones that were running like wild things playing all over just looked like little teddy bears playing. 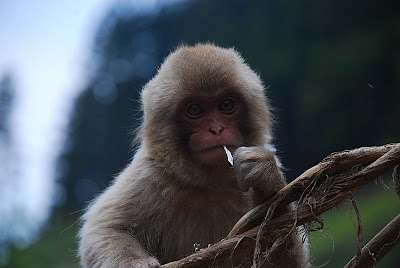 I have wanted a monkey as a pet for as long as i can remember… and i still do!!! They are insanely adorable. And of course paul was just as enammered with them as I was. It was his idea to go again today!

realizing we’d already been there for a good 3+ hours with another 500+ photos, we thought we better listen to our hungry stomaches and head down to town. Not really looking forward to the 4 mile hike home, we stopped halfway to have some food. And luckily the cafe owner spoke decent english so we were able to ask him to call our hotel and see if we could get a ride home!! We were wanting to catch the 4 pm train back to Nagano so we’d be well rested for our first day in Tokyo tomorrow! 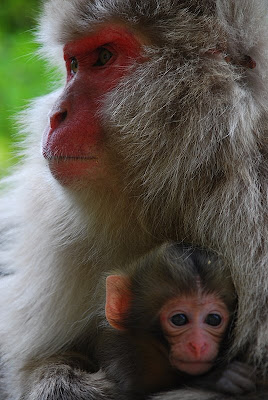 Thank goodness we had our hotel owner come get us.. Our cafe host was a chatty cathy! He wanted to know everything about India and Ireland. He didn’t seem to need any info about the US – he said in the papers here everyday they talk about the election and he’s well versed in that! haha. But I had to pee and we really wanted to catch this train or else it would mean another 1 hr wait. Our chatty hotel owner rescued us!!

I must make a note about him. He’s hilarious. He says “ok ok” all the time. Its so funny. And he kind of just tells you what you are going to do. This isn’t so common with the other Japanese here, so it was pretty funny to us. And now I am due to write a review for him on his facebook! He’s on facebook and wants me to add him asap! He also took a photo with us.

The other thing though.. the people in Yudanaka are so nice. The hotel gave us complementary chopsticks. I got one pair with the lucky cat and one pair with a traditional japanese woman. At the cafe he gave us some oragami toothpick set for couples. They are just so sweet and welcoming and really just want you to enjoy your time in their town.

We definitely hope to be back in Yudanaka someday.. hopefully in the winter so we can really see the snow monkeys in the snow! This is also the area where the 1988 olympic ski slopes were. It’s a hotspot for skiing.. so maybe we’ll give it a go someday.

Back in Nagano now – in our exact same hotel room as we were in on Thur! Nothing much to do but load photos, book train/hotel for tokyo and get cash. We saw a Denny’s and thought we’d check it out.. i was in the mood for a grilled cheese. unfortunately it did not have ONE item from US denny’s so we moved on and headed down the road to a traditional japanese hole in the wall. It was good and run by a sweet little granny who was excited to practice her English.

We are just astounded over and over by the friendliness of the people here and how they go out of their way to make sure you enjoy yourself. Such a change from India. And it’s so genuine. I’m absolutely in love with Japan. Already scheming on how we could take off some time and live here for a while 😉

Some random observations from the last few days:

Tomorrow we head to Tokyo!! We’ve extended our time there and are really looking forward to it all.