Posted on May 16, 2008 by kkowen
On Friday we got up bright and early and headed out to Zenkoji Temple here in Nagano. It’s one of the holiest Buddhist temples in Japan and houses the first Buddha statue to ever come to Japan. (Although it is mummified and kept from the public view). It’s a huge temple complex filled with tons of photo opportunities. I had wanted to get there super early for services, but that didn’t happen! We were fine just pottering around taking photos. We also did another one of those underground ‘dark’ rooms. This one wasn’t as scary, but also didn’t have anything to hold on to, so you just had to keep touch with the walls to know where to go.

After several hours taking photos and exploring all the nooks and crannies, we headed for lunch. I had cold soba noodles for the first time and they were yummy! I’d been weary of them since its cold, but it was really good actually. We even got to see the buckwheat noodles being freshly prepared from scratch.

Next it was time to head to Yudanaka… the monkey park! I have been so excited for this destination. When I was in grade school i remember writing a report on the Japanese snow monkey and as soon as I saw that it was near our route it was a must see.

Finding accommodation didn’t prove too difficult. We called a few places in the morning and found one with a very characterful English speaking man. On the phone he was telling us to come now to go to the Monkey park and then for an onsen (outside hot bath). He was very insistent, but I told him we’d be there later in the afternoon. Our plan was just to chill for the night and then go to the park the next day. But once we arrived he was all set to take us to the monkey park and there was no arguing with him!

The park was about 3 miles from his place and then at the drop point it was another mile up hill. But we managed and actually enjoyed the quite walk up into the mountains.. with the anticipation growing! We aren’t very good hikers.. neither of us had a drop of water, a map, anything – but luckily it’s a pretty easy trail to follow!

Before we even made it to the entrance we had stopped at a vending machine (can’t go too far in Japan without one) and there was a monkey sitting on top!! I was already so excited. But i’m also a bit scared of the monkeys since I’ve been chased by them in China and in India. These monkeys seem pretty cool, but it was difficult to get over my scared-ness!

Entering the park we were greeted by tons of monkeys all over the place. I was as excited as a kid in a candy store. But I was a little weary of getting too close. But eventually I noticed that Japanese families were letting their small children right up near them, so I figured it couldn’t be so dangerous. I was starting to get my nerve up and then got ‘yelled’ at by a monkey!! They were so adorable. 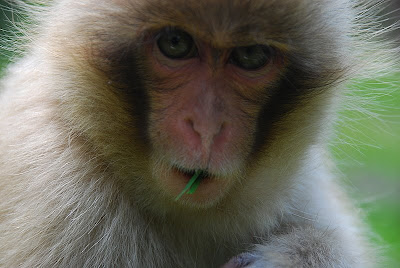 Little ones playing all over the place without a care in the world, others sitting in the hot outdoor springs, others cleaning each other, etc. Life just going on without a care about all of us watching and documenting their every move. Between us I think we took close to 500 photos. I didn’t get anything that I totally loved since I was too wimpy to get right up in their faces, but Paul got some good close ups! Completely enthralled, we stayed until close to dark and then had a 4 mile walk back to the hotel.

The walk was a little brutal.. we had no idea where we were going since neither of us paid a lick of attention on the way – but amazingly we didn’t make one wrong turn! We stopped at a police station that ended up being a block from our place, just to make sure..

Once arriving back at the hotel, the charismatic hotel owner told us we needed to do onsen baths. He said we could do it at his place, but we’d experienced an indoor private bath before, so we opted to head out to a private outdoor bath with views over the town and mountains. It was a bit expensive.. 25 dollars for a bath – but totally worth it! Our bodies were tired and looking forward to our 50 minute session.

The private facility had a sauna, outdoor hot spring and indoor showers. All of it overlooking the city below. It would have been great in the sunset, but we got there too late. Not totally sure on which order to do things, we just made our own rules! One thing we didn’t realize is that the bath’s are full full and anything on the ground beside it will be flooded. We found this out the hard way.. one towel totally soaked, cigarettes soaked and camera almost flooded! Luckily everything seems to be in working order – but a little scary experience to start off our relaxation!
And man.. that water is hot. It doesn’t feel so hot until you sit in it for about 3 minutes and then you feel like you can’t breathe anymore! Then we’d hop out.. cool off in the mountain air and then head back in. Repeat for 50 minutes. I think the longest we ever managed to sit in it at one go is about 4-5 minutes.

Feeling totally drowsy and about to pass out, our lovely hotel owner picked us up and then showed us where he’d take us to dinner! Haha. He dropped us at home and had us walk down the hill to a small local sushi place. It held about 10 people and there were already 5 in there when we arrived. All ‘salary men’ as paul loves to say. (he’s become obsessed with the salary man and thinks he wants to be one.. mostly b/c he seems them drinking at the bar in their suits all the time!)

The owner of the restaurant didn’t speak a lick of English, but seemed to understand. I ordered tempura and paul just asked for sashmi. No idea what we’d really get, but it was excellent. Paul loved the fish and ordered a second plate. I was just trying hard to not fall asleep in my plate. The onsen really drained me of any energy I had left!

I was asleep before my head hit the pillow! Luckily our talkative hotel owner wasn’t around to chat before we went to bed!

No idea what is in store for us tomorrow… we just couldn’t make any decisions with such heavy heads from food and hot springs. We’ll figure it out tomorrow!