Posted on August 15, 2008 by kkowen
I seriously do love this city. Maybe it’s just because it’s different than Mumbai, but I think I just really like it here. It already feels like home! The people are fantastic, the food options are wonderful, it’s so easy to walk around or take the train and there are so many ‘free’ things to do!

The day before yesterday we had errands to run. Weird I know, specially when we are on holiday! But we had things we needed to mail and had to pick up some wrapping paper. It took us almost all day to find the post office. The maps are literal here – when it shows a little envelope on the map, it means a post box! But our little adventure took us walking through our neighborhood and through nice wall murals and then to checkpoint charlie. 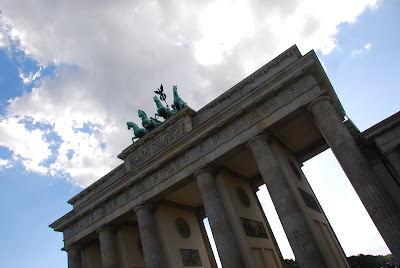 After that we went to the Reichstag (govt building) and waited in line for an hour to go in (free). It was nice. not sure if it was worth the hour wait, but it was sunny and it was fine to sit out in the sun for a while. 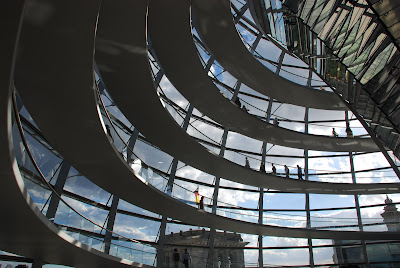 Then we headed off this bombed out church that i remembered from my first trip here 8 years ago. It was a nice day of pottering around, getting the lay of the land.

At night we went out with our friends for their bachlor/bachelorette parties. I was a light weight and came home by 2 while paul stayed out until well after 3. Note – there are no real timings for bars here. They are open until the last patron leaves! Not good for some people i’d say! And apparently the beers are super cheap. A night of drinking for Paul and it was only 11 euro. Haha. My total bill was 3 euro 🙂

Yesterday we had a super mellow day, sleeping in and then napping for a good part of the day. I think I needed that to really get over this cold I’ve had. Then we decided to go down to the ‘cool’ street near our house. It was fantastic. 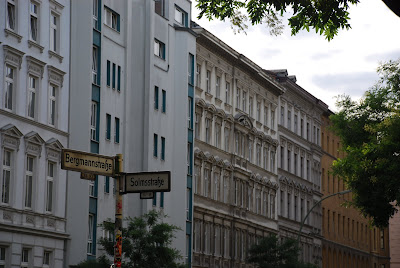 It was a long boulevard lined with cafe’s, arty shops and second hand shops. We had sushi for dirt cheap – 5 euro each for about 10 rolls each!! loved it. then sat at a park and watched the kids play in the water fountains since it was nice and hot out.

Then a friend of ours who used to live in Mumbai called and we met up with him. We met in the same district that we are staying in Kruezberg, but it was so different over on his side. First we met in a super Turkish area and then walked for about an hour along a beautiful canal to the other end of Kruezberg where he works. Had some drinks and snacks at a canal side cafe, had a tour of his new post production facility and then headed back to our part of town to meet up with the wedding party – 2 hours late! Saw a beatles inspired band at one cafe and then headed back to our favorite neighborhood bar Pinguin.

I was a little worried about getting home in the taxi thinking they wouldn’t speak English. But our driver was Turkish and recognized my accent right away as being American. We yammered all the way home and really got some good insights in to how people think (at least perhaps the Turkish pop) about life here, America, politics, etc.

Today it’s raining and it’s the wedding day. But perhaps it will be fine since we’ll be inside for most of the day. Most festivities, people to meet and reasons to love this super laid back city. I’m seriously ready to move here tomorrow!! We’ve been devising all sort of plans of how we could make this happen. Need to start working on my German skills asap 🙂

This entry was posted in berlin. Bookmark the permalink.