Posted on August 23, 2008 by kkowen
On our first day of the tour, we absolutely pooped ourselves out! We started off a bit earlier than our original itinerary had stated, but it was because we were going to sneak in a quick look at Lenin’s dead body! We waited in a long line, which apparently was quite short since it was a Sunday and was still early. We gave all of our belongings to Dasha our tour leader whom we had just barely met the previous night. Cameras, purses, basically everything of value we had to hand over since almost nothing was allowed inside Lenin’s Mausoleum. We walked down some stairs to a cold dark room where we were admonished for talking and for putting hands in pockets! ok… Then we circled around his dead body. Not sure if it was really him or not. Apparently every so often they have to do ‘maintenance‘ on his body which takes several months. During those times, a wax body is put in his place. I’m sure they have probably created a perfect copy in wax, so we wouldn’t know the difference. I’d say you’d have to go once a month for a few years to see if you ever noticed any differences. But it was a bit eerie seeing his dead body there!
After that little intro to Russia, we walked a bit further on the Red Square to the colorful and beautiful St Basils Cathedral. I knew from my first look that I would end up taking hundreds of photos of this building. It’s absolutely beautiful and feels like candyland or something from a fairy tale. Someone told me that this was the inspiration for the Sleeping Beauty castle at Disneyland. Not sure though. 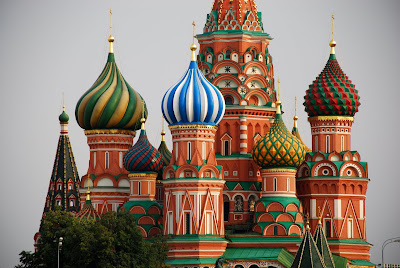 We met our first local tour guide here and she gave us a ton of history on the area, the Red Square, St Basils, etc. But of course I don’t remember much at all. I do know that the cathedral was built by Ivan the terrible and that it has 9 domes, which is apparently 9 different ‘churches’?? or worship halls perhaps. Anyhow, I couldn’t pay much attention to the guide since I was captivated by St Basils! We walked around Red Square for a while learning (or hearing in my case) the history of it all. 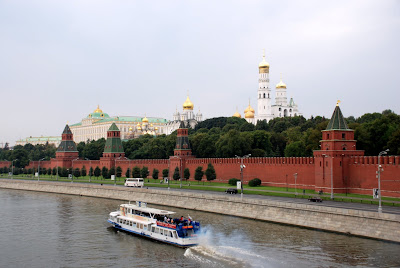 Then we pottered over to a bridge by the water to see the Kremlin from another angle. After this our tour took us through the old GUM Government Department store which is now a high end mall. It was beautiful. Then on to one of the main streets just outside of the Red Square where we saw the KGB offices from afar. Its too bad I never went back there to see it close up. I really wanted to learn more about that – but as most things associated with the Soviet Era, it was just glossed over. 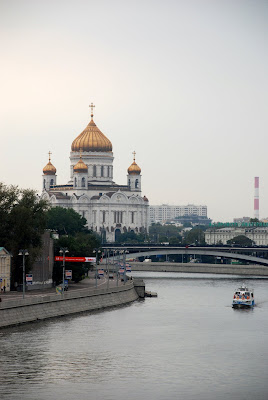 Even though thus far we had not done a lot of walking, it was the standing around that was already starting to kill my feet. Granny seemed to be managing fine, but i was already getting tired and hungry. It was after 1 when we finally were told we could go eat some lunch. We were pointed back towards the GUM where there was a Soviet era type canteen where we could get lunch for a decent price. I think the whole group headed there. And thank goodness we did. It was excellent. I got way too much food the first day – it was like a Luby’s Cafeteria where you just go down the aisle picking up what you want. I love these type of places because I can actually find things to eat! I got apple strudel, apple/carrot salad, plain crepe, apple crepe, mashed potatoes and some brown bread. I was stuffed, but happy!

We had a little bit of free time before meeting up with the group again, so Granny and I just wandered around the mall a bit, checking things out. Then we met up with most of the group again at 6 for our tour of the subways. Of course that was a little bit delayed because Dasha recommended that we walk 30 minutes to this arty district called Arbat. Of course we took a long long long route and it ended up taking 1 1/2 hrs! Needless to say we were all pooped. Granny was still being a trooper, but I think she had just about had it. If we had been there a bit longer and she knew the way home she would have gone for sure. After that long walk, we finally did a quick tour of the subways. 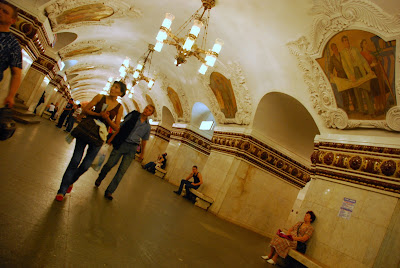 The subways are insane there.. they are decorated like art museums. Not all of them, but the main ones for sure. Of course we were told we couldn’t take photos since it is attached to the military. Urgh.. really this city needs to be a little more tourist focused I think. They could make good money doing subway tours!

We got home late and were thoroughly exhausted. granny just went up straight to bed. I did a little internet (see previous post) and then ate a snack before heading to bed.

I have to say that initially I wasn’t that impressed with Moscow. I mean I loved the Red Square and all, but overall, I just didn’t feel any real connection to the city at this point. Even looking back now, I am not sure if I would really ever want to go back to Moscow – I certainly don’t think I want to live there like I had previously thought…. although that canteen is pretty yummy so maybe I could 😉 But I think that as exhausted as Granny was she actually was quite impressed with Moscow. She had pictured it as very communist looking – dark, grey old buildings, but it was really colorful and beautiful instead. Off to sleep to prepare for another day tomorrow!

This entry was posted in russia; moscow. Bookmark the permalink.