After an exhausting first day in Moscow, we were happy to look at the itinerary and see that we only had one thing booked today and then the rest of the day was ours! Our morning began at the famous Kremlin where the government of Russia still resides. I can’t remember all the history that was given to us that day.. but I do recall that it used to be the center of the village and that the entire area was crowded with old wooden homes that were set fire during one of Russia’s many wars! 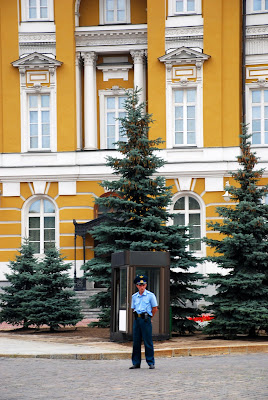 I thought that we’d get to go into some buildings or something, but instead we just go to walk around in the inside of the Kremlin walls and see the insides of the church there. But I guess with Putin hard at work within one of the buildings, figuring out what to do about the war with Georgia there was no chance we’d get to go inside!! But I must say there was a total lack of security presence inside the Kremlin. We weren’t frisked as we went in, although we did go through metal detectors and I had my camera looked into. Besides that, the area was just filled with tourists like us! 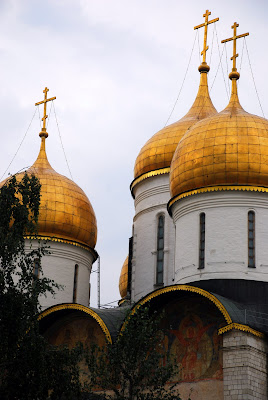 We spent a good amount of time hearing the history of the Kremlin by our hilarious tour guide. She kept saying funny things that some might take as being anti-Russian. She made a comment about how Russia loves war, but is never prepared for them. She said that since Russia had signed a peace agreement with the Nazi’s that they just left their borders unarmed..and then were shocked when Nazi troops were close to closing in on Moscow. She was totally different than our guide yesterday who seemed very pro-Russia. Interesting.

But again, we got very little information on what we wanted to hear most about – the Soviet Era. I guess perhaps they just don’t know alot about it themselves to be honest.
After our short, but long tour of the Kremlin, the rest of the day was ours. Granny and I headed off to the canteen for our favorite lunch. I of course got the same food as the day before, but Granny tried all new things. She’s adventurous like that! 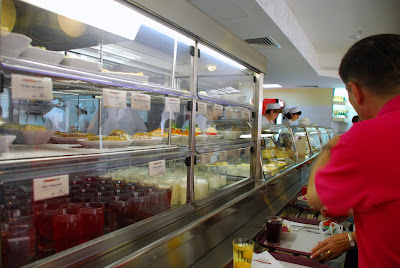 After lunch a few people were heading back to the hotel area, so Granny thought it might be best if she went with them since I had a long day planned for myself. I was going to see a friend who used to live in Mumbai to pick up our train tickets and then stay in the city center for night time so I could see all the buildings lit up. And the sun doesn’t set until well after 9pm.
Granny headed back with a whole group of people and I ventured over to Hazel’s place. I had hoped that by visiting someone who lived there I would get a better feel for Moscow and perhaps see something besides the Red Square. No such luck! Hazel lives on the road directly opposite the Red Square, so I didn’t see much more of the city than that!. But it was great to see her place and her twin babies. And btw, her nanny was from Georgia, so that was a bit interesting. We mostly caught up on mutal friends and then she told me about life in Moscow. She’s only been there about 8 months, but she hates it and is ready to leave again. She re-iterated what we had already felt – the people aren’t so friendly, there is no service industry whatsoever and the prices are insane. For her it is also difficult as there are no lifts to be found anywhere so she can’t take the metro since it’s underground and can barely cross most of the streets since the street crossing is also below ground. And to top it off, when she is out walking the babies, there are often cars parked on the sidewalks so she can’t walk there either.
This little visit made me realize that I probably wouldn’t be so happy living in Moscow either. Although I can get up and down the stairs – it’s just the not so friendly staff at places that would drive me insane. I’d probably be shot within a week for yelling at people!! 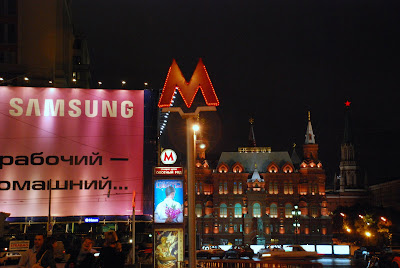 After our visit and my almost run over by a porche, bmw and mercedes all three trying to turn at the intersection at once I met up with some of the rest of our tour group for some dinner and drinks. We hung out at a cafe near red square for a while – watching a totally drunk man try to make his way to the door. It was our own little soap opera for a bit. After that, we decided to venture back towards where I was earlier in the day to find a place for dinner. Of course it was all a bit overpriced, but where we ended up had excellent food…Italian! After an hour wait for our change, we finally left close to 11 at night. Now it was time for me to get my night shots of the buildings. Oops.. I forgot my good lens and my tripod. Oh well.. still managed to get some decent photos. 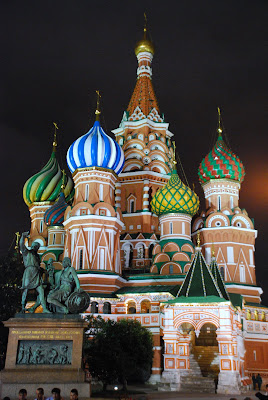 And then the long journey back home on the metro. Since we can’t read the signs, nor do we understand or even hear the announcements for the trains, we are forced to count stops. This is a lesson in concentration. If you have ever used subways much, you know that you can easily get carried away in conversation and forget how many stops you’ve passed. To combat this, all of us would hold our hands up with the number of the stop so that we didn’t forget. And it worked.. we made it right back to the hotel without a hitch.

Wednesday – today is also a free day. I am in need of a swimsuit (swimmer, swim costume, etc) for the sauna experience coming up tomorrow. I don’t know how I missed this when packing. So Barbara and I have decided that we will see the flea market by our hotel in the am and then head into town.
Oh man.. it is blustery cold and rainy today though! It is seriously cold. We managed to potter around the market buying all sorts of crap. I think i got a million things that I don’t need, but missed out on the one thing that I would have loved. The russian book of old posters. Two other guys in the group got it and showed me later, but it was too late to go back 🙁 I think it must not have been up when we were there, because all i saw were nesting dolls and christmas ornaments!
After spending all of our money, Barbara and I head to town to eat at our canteen for the last time. It was still yummy even on day 3! Did a bit of swim suit shopping, but gave up and decided I could just wear a tank top with undies. Heading back to our hotel was misery though. It was seriously freezing cold. And for some reason my shoes leak water inside. I don’t know how this happened, but apparently there is a little hole at the bottom or at the seam. Oh so sad.
But we made it back in time to dry our socks under the hand dryer and retrieve our bags from the luggage room. And then it was time to head off for our night train to Pscov. it would be most people’s first experience on a train such as this. Dasha, our tour guide, said it was exotic. but after hearing her descriptions, I realized it is just like the Indian trains I ride here. Uh oh.. the group is not going to be happy about this! haha.
More tomorrow after our journey.. all 50 people on one carriage with only 2 toilets as some of the ladies were obsessed with saying.
This entry was posted in russia; moscow. Bookmark the permalink.