I woke up off an on all night long hearing the rain beat down on the plastic shedding near our window. I kept thinking it was the AC dripping (ours at home drips like crazy)! Not sleeping well and having a day of rain we decided to head out early and see what time we could head to Koya San. Luckily we’d done most everything we wanted the previous day.. and that we had changed our original plans of staying there 2 days. It was an adorable town and would probably be nice to potter around on a bike, but not in the rain!

We went to Muji before heading out.. I just couldn’t contain myself! I got some cute little organizational items that I love and then we packed up to head out. We decided to walk to the station even though it was rainy and cold. Somehow we have decided we don’t want to take taxi’s here!! So funny the little ‘rules’ we come up with. But it was nice walking actually – we were soaked by the time we got to the station, but we got to wander through some real neighborhoods and see some real Nara.

Our trip to Mt Koya was slated as an adventure.. the book says half the fun is in getting there! We boarded a local train for about an hour 1/2 and then had to change to another train, buying new tickets. I almost made a costly mistake by buying tickets for another carrier, but caught it just in time!! (there are state trains JR, and all sorts of private lines, so it gets confusing sometimes which machine to use — especially since its rarely in english!)

But problem averted, food purchased (a bento box for folo — 7 peices of sushi and crackers for me!) and second train boarded. First I have to mention that it was already pretty chilly down in Nara and the guidebook says that Koya san will always be at least 5 degrees centigrade colder than down below. This was seen a great thing when it was boiling in Kyoto, but now that the weather had turned a bit colder and rainy, it was a bit troublesome!

When we were changing trains, we were freezing… and weren’t even near the mountain yet! uh oh. Luckily for these good ol vending machines.. they also dispense hot coffee in a can of all things. But these are very good for cold hands.

Our second train was slated as a very windy scenic trip. It was. It was beautiful even through the rain and fog. The houses were much more traditional and it was super green out. Our next stop was at the base of Koya San mountain where we then had to board a cable car to take us up the mountain. It was FREEZING when we got off to board the cable car. Unfortunately all I packed for us were our hoodies!! oops. It wasn’t supposed to be this cold. It was probably in the mid 40s F and it was the middle of the day. But I was excited anyhow… I love going into the mountains and I love buddhist sanctuaries! 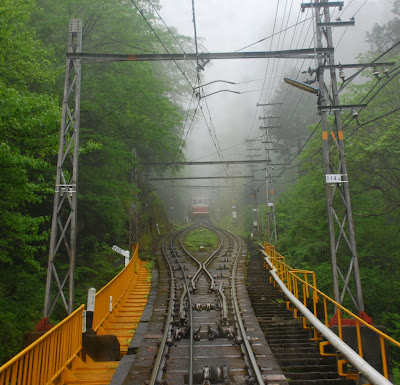 The cable car went straight up the mountain in about 5 minutes. Some people were scared, but I was too busy taking photos and being excited! Once we got to the top it was even colder! People were going on and on about it all… talk of the day! And now for our final leg of the journey… a bus for 20 minutes. Somehow I always tend to pick places that take ages to get to.. but I usually enjoy the journey and the place more than anything else!

The town was adorable as predicted. High in the mountains shrouded in fog (and still raining). We found our ‘hotel’ which was actually an operating buddhist monastry. It was beautiful. It was all the castles and temples we’ve been visiting but not allowed to wander around in freely. Our room was traditional tatami mat with a balcony overlooking the garden.. and thankfully had a portable heater! 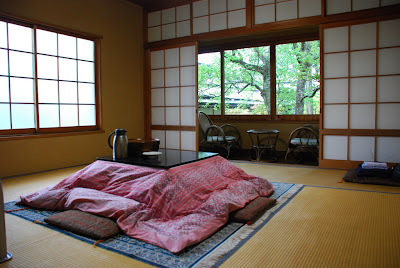 We warmed our toes and then bundled as much as we could before heading out to the main site (for me) which is a massive cemetary. The guidebook says any buddhist worth his salt has had their ashes or at least a lock of hair deposited here. I love buddhism and i love cemetaries, so this was a must destination for me. We took the bus further up the hill and started our exploring. It was very vibrant in the rain – so much greenery and moss on the old tombstones mixed with just blooming colorful trees. Freezing but loving it we wandered around until our dinner time of 5:30. 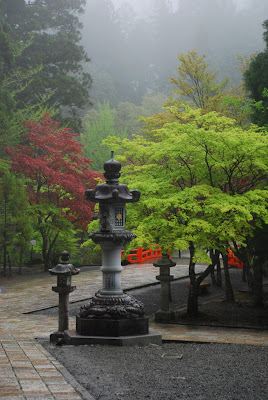 The thing with staying at the monastries is that you have to go by their schedule and your stay includes dinner and breakfast. All food is completely vegetarian with no dairy, fish, also no onions or garlic. Typical buddhist food. But this was good news for me b/c it meant that no matter how funny it looked or smelt I knew it was veg and I could eat it without worry (not that I’ve been a very good vegetarian here.. been eating fish and pork!).

Dinner was brought to our room on trays with hot green tea as well. It was a beautiful setting. 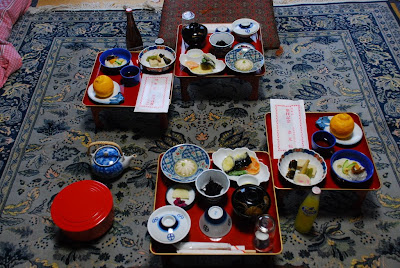 And the food was actually quite good. Folo ate his all of course along with a bit of mine, but I did pretty good and was stuffed. Since it was still light out we decided to head back out to explore the cemetary some more. We were trying to get ‘atmospheric’ photos.. but it was too dark and rainy to get much.

Again we headed to our room as the town was shut and were in bed before 9! No showers at this place.. only the communal hot bath. We checked it out, but it was full of other naked foreigners, so we decided to give it a pass and just head to bed. But not before trying on our yukata (robes) and modeling for photos!