Our train journey was an adventure that is for sure. I don’t think our tour guide Dasha was prepared for the moaning and whining that went on at the beginning of our journey. We had tickets for all of us, but we were not all sleeping in the same birth so it got a little chaotic. Granny got on first and chose the first seat – which ended up being one of the worst. She believed it when Dasha told her that we could change later. Me.. I know how these things work and you never get to change!! But we managed and delt with it. We were the first seats right by the door and bathroom. I thought the problem would be people opening and closing the door all night, but that wasn’t an issue because they never closed the door!!! Which meant that the light was shining in my face all night long. Grr. Granny also didn’t get much sleep mostly because she would wake up each time the train stopped – which was all the time. And for those of us on the upper bunks, it was hot with no air circulation.

So basically a group of 15 tired, dirty and hungry travellers got off in Pscov not in the best of moods. We had little time to check in to our hotel change clothes and then head out for our day. I had borrowed a tank top from Barbara, which I promptly lost between the lobby and the 4th floor. I spent our 20 minutes freaking out trying to find that rather than actually getting ready for the day ahead. Luckily someone else had found the tank and returned it to Barbara, so all ended well.

Our first stop was the old monastry outside of Pscov. They were in preparations for a big festival the next day, so it was a bit interesting to see how it was all put together. They were laying a blanket of flowers that the procession would walk on. We were required to put on a black skirt over our clothes and then also cover our head. Unfortunately we weren’t told in advance or else I could have brought the shawl that I brought all the way from india for this reason!! 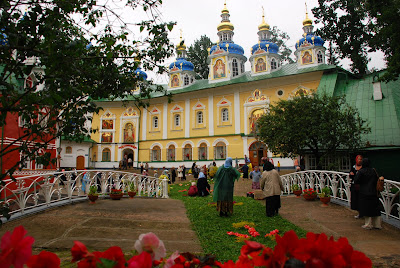 And of course the OntheGo Tour brochure made this place sound fantastic with the burial caves, etc. But it really wasn’t that interesting and we had no time to wonder around ourselves, so it sort of seemed a waste of time in my opinion. But others seemed to enjoy it a bit. 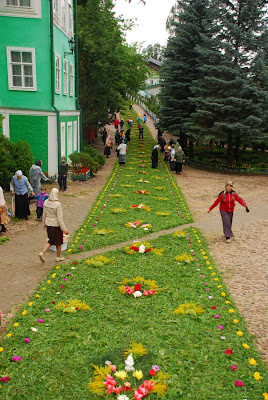 After being hustled through quickly, we were then taken to the Pscov Kremlin and driven past quickly! We did manage to get out for a moment and have a group photo taken, but that was about all. Then off to the other side of Pscov to have lunch and begin our sauna (banya) experience. It was a tiny little wooden cabin with a room to eat and one room to change and the actual sauna in the middle. it was nice, but not at all what I was expecting. I thought it was going to be some super cool sauna experience.

We did have a great time though. We went into the sauna in groups. Got super hot.. came out and splashed ourselves with cold water, then repeated the process. But this next time, we were beaten with twigs by Dasha! That was a bit interesting. I didn’t feel like my life had changed though. But then.. we were told to run outside and jump in the freezing cold lake. Yowzers.. that was ice cold. I felt my whole body go numb within seconds!

Then it was time for the actual lunch. Unfortunately it was all meat, so I didn’t get to eat anything 🙁 But I enjoyed playing with the 16 stray kittens outside and feeding them the salmon which was supposed to be for me.

Not the best day on the tour for sure, but we all still had a blast. Then it was time to go back home to shower and prepare for dinner. We had a group dinner that was included in our tour. It was good, if not a bit quick with the service! As soon as we all sat down, our plates began to arrive and within minutes of getting that our ice cream deserts started to come! A few people freaked out and told them to hold the ice cream, so luckily ours didn’t melt in the process.

After dinner the youngin’s decided to hit the town… not much to do here except a bowling alley/entertainment center or a disco. We opted for the first option. It was great fun. Bowling was excellent even though most of us sucked, then it was air hockey and just watching the locals in action. A good opportunity for all of us to really get ot know one another. I headed home around 1 but others stayed a bit later I think.

The next morning we were told breakfast was from 8 -9:30. So of course those of us who went out, decided to go down around 9. Well… not such a good idea apparently. We thought it was buffet style like our other hotels, but it was not. So our meal had been set out at 8 and was sitting there cold as a cucumber. We ate it without complaint, but when we asked for coffee this is when we received the true Russian hospitality. We were given the rolling eyes and loud sigh and told not possible. We continued to ask for it and finally got some. We let it sit and cool down a bit, added our sugar and cream and then went to drink it. It was COLD! When we then asked for HOT coffee.. we got more eye rolling and then our waitress went to the manager who was deeply engrossed in some russian soap on tv and started yelling about us. She was pointing our way, yelling, eye rolling and carrying on. It was pretty funny actually. Of course the manager told her to get us hot coffee. After we’d finished breakfast we had only a little amount of time before our bus was set to leave, but still no coffee. So I decided I would leave. She of course brought the coffee as I reached the door. I left anyhow fed up with this wonderful service, but my friend stayed and bore the brunt of her anger. Of course this just gave us a great story to talk about the whole day and for the rest of the trip! But it also clearly outlined how they do not care about their customers in the least!

So that was our experience in Pscov…not really worth the train journey there. I think we all would have prefered an extra day in either moscow or stp.
And tomorrow.. we board the bus for our 5 hr journey to STP.

This entry was posted in russia; pscov. Bookmark the permalink.